Rewarded video ads are full-screen videos that appear inside your application.

Make sure you add the Tapdaq namespace to the top of your script:

Before displaying a rewarded video to the user, please load the rewarded ad as shown below:

Next, you need to display the rewarded ad to the user when they tap a button. Let's say you linked a TappedReward() method to a button.

This code checks to ensure there is a rewarded video ready to display before displaying it.

If you want to check a rewarded video is loaded before displaying the button a user would tap to see the reward, implement the following:

This ensures that the button is only displayed after a rewarded video has been successfully loaded and is ready to play. For a full list of rewarded video delegate methods we support, see our Callbacks page.

We strongly advise against trying to show a rewarded video ad on application launch.

Once the user has watched a video, the player should be rewarded. Use the RewardVideoValidated listener to obtain the reward.

TDVideoReward.eventId is a unique identifier for every reward given to a user.

4. Load another rewarded video on close

If you wish to load another rewarded video after you have shown one, implement one of the following options:

A. Auto Reload all Ads

To auto reload all ads using the same placment tag set the Auto Reload option in Tapdaq Settings, like so: 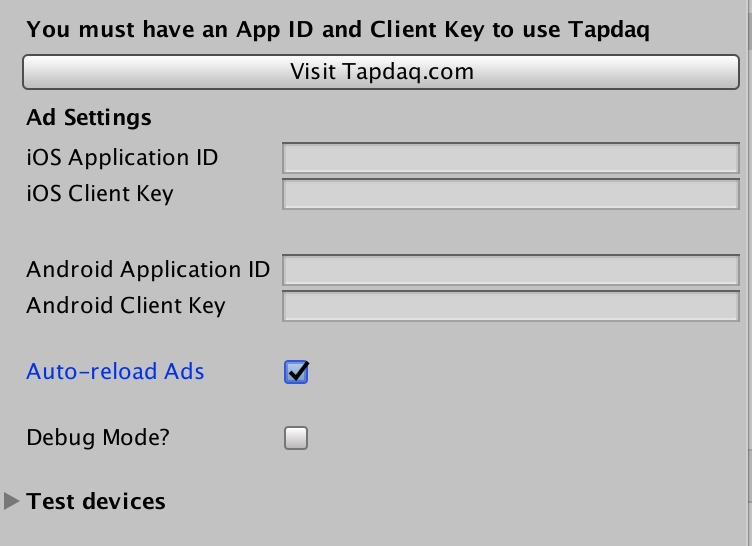 Add a delegate event for OnAdClosed, then call load within the delegate method like so:

Tapdaq SDK triggers server-side callbacks when a reward is provided, along with the client side RewardVideoValidated callback.

The Reward Id is used for server-side callbacks, you can also retrieve it based on placement tags in the SDK like so:

The Reward Id must be enabled on the dashboard. Pre v7.0.0 this ID would be consistent across the session for the same reward, from v7.0.0 the ID will be different for each ad loaded, this getRewardId method will get the ID from the next ad that will be shown. It will return null if no ad has been loaded._

A User Id can be passed into the AdManager.Init() method or at any point during the session, this will then be added to our server side callback to identify users.

A Forward User Id flag allows the UserId to be sent to other networks. This defaults to false.

The String should be hashed before passed to Tapdaq SDK.

If you are having any problems integrating, feel free to contact us on [email protected] and we will be more than happy to help.

Now that you have successfully integrated a rewarded video into your app, what would you like to do next?